They were also transgender, feminist Muslims.

A pretty comprehensive study on Viking Age DNA was released this month and, as usual, it has been completely misrepresented by the mainstream media / Leftists / Globalists / etc. (they constitute one hostile amorphous mass at this point). This article will provide an unbiased, layman-friendly rundown of the study’s major findings, in addition to shitting on the people responsible for misrepresenting these findings, as well as contextualizing these misrepresentations within the modern political landscape.

Skip to section 7 for the study summary if that’s all you’re interested in.

‘Viking’ as a noun stems from the Old Norse verb ‘víking’, meaning “marauding, piracy, raiding.” The Old Norse added ‘-r’ to the end of words to turn them into nouns, so ‘víkingr’ (meaning “raider” or “pirate”) was the noun for people who did the ‘víking’ (raiding). Another example of this is the Old Norse equivalent of “badass” — ‘drengr’ — which comes from Old Norse ‘dreng’, meaning “strong, healthy.”

The study this article covers is specifically concerned with Vikings (raiders/pirates), and their immediate families, outposts, trading hubs, etc., rather than Viking Age Northwest European populations as a whole — though, these populations were used as reference.

In brief, the study demonstrated that Vikings were extremely ethnically homogeneous, and genetically/phenotypically near-identical to modern Northwest Europeans, who are their direct descendants. The study confirmed everything that we already knew about Vikings, uncovered a couple of new interesting facts, and confirmed a few theories. No major surprises for anyone who knows anything about Vikings and anyone who knows anything about European genetics. I’m not knocking the study, though, the authors did a great job.

However, you wouldn’t know any of the above if you didn’t read the paper yourself. According to the mainstream media, the study demonstrated the precise opposite. They aren’t exactly known for their honesty and integrity but even I was surprised by the audacity of their lies.

Our enemies had a riot with this one; the Vikings weren’t “blond, White, European people,” they were “diverse,” “mixed-race,” “People of Color,” who were absolutely not “genetically pure,” and so on.

Below are a few choice quotes from the National Geographic propaganda piece, all of which will be debunked in section 7 of this article.

4. Why they manipulate history

It’s been the same old story for every European ethnic group for the past several decades: Globalists relentlessly re-writing our histories with gobbledygook revisionism that isn’t supported by a shred of evidence.

We already know why they’re doing this:

“There’s no such thing as pure races, so that means you need to accept infinity Third World migrants flooding into your country and you can’t complain about it otherwise we’ll call you a racist white supremacist :^)”

It’s not really a secret at this point, we’ve exited the “diversity is great for society :^)” phase of globalism and entered the “you deserve diversity as a punishment for being White >:^)” phase.

Anti-White propaganda serves two main purposes: Firstly, it serves to bamboozle and demoralize European masses into accepting the importation of millions of overtly hostile people into their homelands. Secondly, it serves to rile up these already hostile peoples into an anti-White frenzy, encouraging them to attack and harm White people.

“Black Power, Kill White People” doesn’t exactly leave a lot to the imagination. What’s going on should be pretty obvious by now: South Africa 2.0 for the entire Western World.

European governments barely even punish or prosecute people responsible for attacking Whites these days. They get a small slap on the wrist, a tiny prison sentence, and a bunch of free welfare and goodies paid for by the bank of Whitey.

Meanwhile, Whitey gets thrown in jail for thought crimes.

Remember the Swedish “minister of culture and democracy” who ordered Viking artifacts to be melted into scrap?

She also ordered “returning” (invading) ISIS fighters to be “integrated” into Swedish society, which resulted in multiple bomb attacks in Sweden. Unsurprisingly, she hasn’t been arrested for her significant role in these terrorist schemes.

The situation is pretty grim.

I’ve seen multiple viral Leftist Tweets, with tens of thousands of likes and thousands of retweets, claiming that the Viking study proved they were Middle Eastern and African “People of Color” while simultaneously linking directly to the study that completely disproves all of their insane claims. The brazen lies are phenomenal. I would say “I’ve never seen anything like it!” but this is the daily grind for Leftists and I’ve seen it all too often. That being said, to this day I’m still flabbergasted by their schizophrenia-tier delusions.

With regards to schizophrenia, it’s always worth remembering that one in three Leftists are clinically insane (which means that two-thirds of them are walking around undiagnosed).

The Left also completely despises White people, which is why they don’t care if anti-White propaganda is true or not. You can show them that the study they’ve posted disproves their We Wuz Vikangz bullshit but they’ll still continue to ramble on like lunatics, as if you said nothing at all. These people are deranged ideologues who live in a world of complete fantasy. You can’t reason with them.

This may seem tangentially related, but you should also bear in mind that the media organizations responsible for pushing all of this blatant anti-White propaganda have also been pushing masses of pro-pedophilia propaganda. I’m not saying that everyone who works in the media and hates White people is a pedophile… However, just as there is a strong correlation between being politically Leftist and being mentally ill, there is a significant overlap between the “anti-White” and “pro-pedophile” camps.

Alright, now that I’ve sufficiently disparaged everyone who disagrees with me, we can move onto the study.

The peer-review process expunged a couple of bits of information from this study for “no apparent reason,” so I’ll be referencing the official release alongside the earlier non-peer-reviewed preprint, which was released a few months ago. The difference between the two versions isn’t significant and the overall findings presented in both are the same. 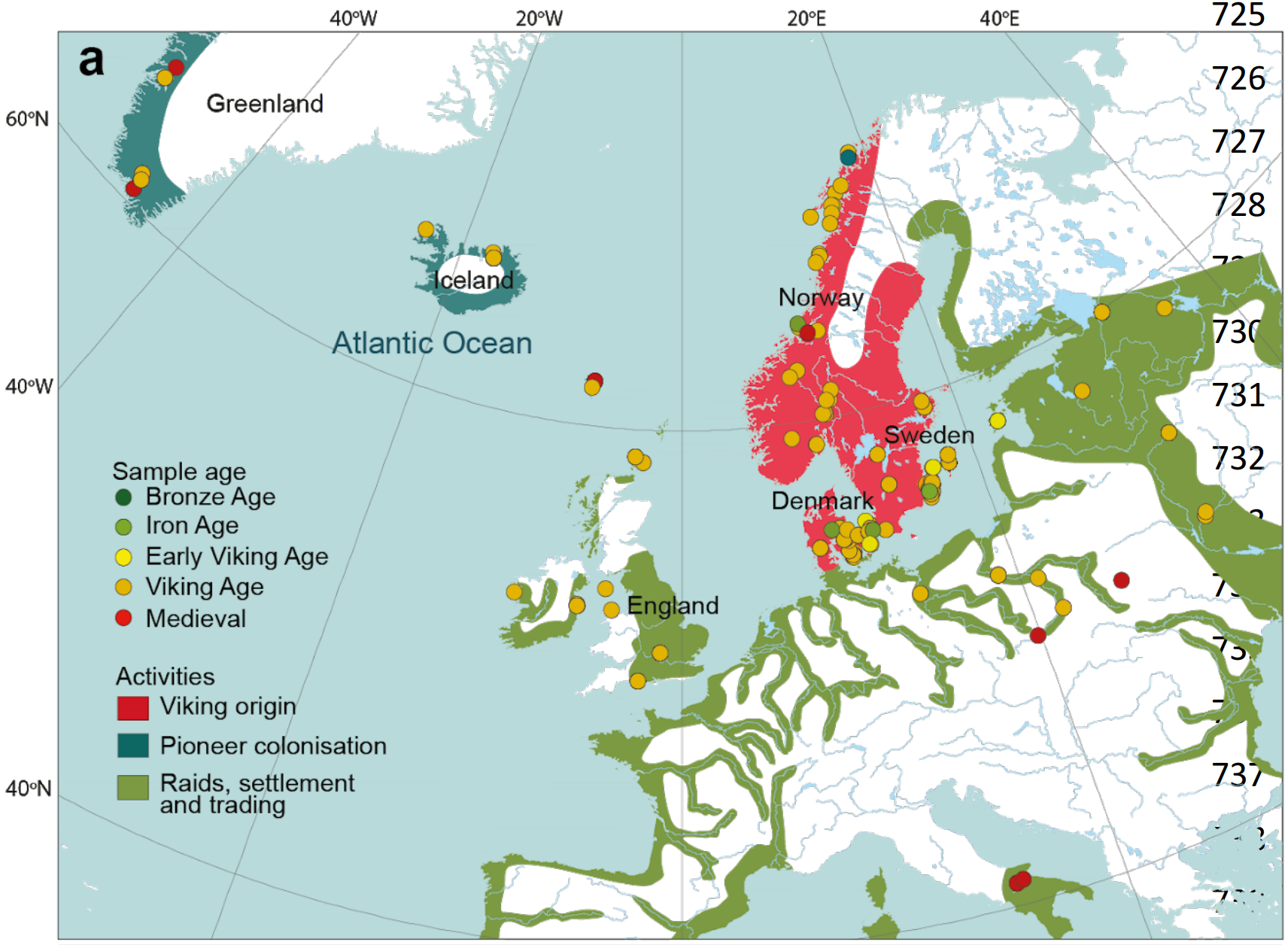 In a shocking turn of events that nobody could have predicted, the study found that present-day Scandanavians closely resemble their Viking-Age ancestors. Except modern Swedes, that is, who were found to be more like ancient Finns and modern Danes and Nords (they cluster into two groups, East and West). However, one of the studies’ co-authors wrote in a Reddit post that:

“The result that modern Swedes doesn’t seem to have a lot of “Viking DNA” in them is not correct, but is unfortunately a bias in the selected material for the study (mostly eastern Swedish samples were gathered, not southern who at that time had much Danish in them. And in the North from people with Norwegian heritage).”

In other words, the Swedes also resemble their Viking ancestors.

This continuity is supported by the study’s ADMIXTURE analyses, which demonstrate that there has been little genetic change among Northwest Europeans since the Bronze Age. I.e, the populations have remained consistent and homogeneous. (Extra lines added for clarity)

The study’s principal component analyses demonstrate that all but three Viking Age samples reside within the main Northern Europen genetic cluster (which, again, has barely changed since the Bronze Age).

The outlier individuals were two Saamis and one Scandanavian Hunter-Gatherer (a Mesolithic native European), all of whom fall within the wider European genetic cluster [see Appendix 2].

Although Northwest Europe is highly homogeneous, the Viking Age populations formed uniquely identifiable groups within this wider population. The Vikings were roughly divided into two clusters: Anglo-Danish Vikings (from Britain and Denmark) and Scandinavian Vikings (from Norway, Sweden, and the Baltic region).

The individual groups within these genetic regions (Nords, Swedes, etc.) were also uniquely identifiable, due to their endogamous breeding patterns (mating within ones own ethnic group) that persist to the present day.

However, the Viking Age Danes and Anglo-Saxons were genetically indistinguishable from one another.

The “diversity” of Viking Age populations was limited to outposts and trading centers (described in the study as ‘cosmopolitan centers’), where admixture between neighboring non-Scandanavian European populations occurred (e.g., Brits or Finns).

A tiny number of Scandinavian Vikings had Viking Age Southern European ancestry (“literally Sub-Saharan African!” according to the mainstream media), but the overwhelming majority were of Northwest European heritage, many having genetic continuity with Bronze Age Scandinavian populations.

Northwest European populations did mix with one another to a degree. For example, present-day Nords are 12-25% ‘North Atlantic’ (British), and present-day Swedes are 10% ‘North Atlantic.’ The study stated that “gene flow within Scandinavia appears to be broadly northwards, dominated by Danish Vikings moving into what are now Norway and Sweden.” Everyone was getting DANED.com.

The study also indicated that Vikings may have had a concept of “race” and proved that they were selectively exogamous. Vikings in Greenland had British ancestry but no Native American or Inuit ancestry. In other words, they selectively bred with some of the foreign populations that they encountered, but not others.

P.S: The PCA below isn’t particularly layman-friendly, but I thought I’d include it anyway. It shows how closely related Viking Age Europeans were to one another and to various Eurasian populations. I’ve added a few additional labels so it’s easier to understand.

The Vikings were extremely genetically homogeneous, not diverse, not Black, Middle Eastern, nor North African. They were just as pale, blond, and blue-eyed as modern Europeans, and had strong genetic continuity since the Bronze Age. The only regions of “diversity” in the Viking Age were the cosmopolitan trade centers, and even then, the “diversity” was admixture between neighboring Northern European populations. They selectively interbred with other Europeans, but not Native Americans or Inuits, indicating that they had some sort of concept of race.

One of the study’s co-authors recently published a video response, in which he stated that the mass media has “spun” the study by publishing “utter baloney” that misrepresents his work. At the end of the video, he states that “there is a lot of knowledge out there about the Vikings and the history books do not need to be re-written, it’s not like that at all” [minor paraphrasing]. He also included an image of Donald Trump, which I can only assume was done to trigger the Libs.

This author also published a Reddit response that included the following quotes:

It’s nice to see that at least one academic isn’t virulently anti-White. Pretty miraculous that he stood up to the mainstream media’s lies. I know for a fact that they’d happily slander him as a White supremacist for doing this. Maybe he doesn’t know that. Good news, anyway.

Globalists often claim that the Saami are “indigenous Scandinavians,” even though they arrived in Scandinavia after the Indo-Europeans, from whom modern Scandinavians are directly descended. Our enemies do this because many Saami have a slightly East Asiatic appearance, due to their ‘Siberian’ ancestry, which is Ancient North Eurasian (Caucasoid) + East Asian (Mongoloid).

Due to this Eastern admixture, globalists claim that the Saami are “People of Color” who are “genetically closer to East Asians than Europeans,” which is obviously complete nonsense. Saami are ~75% European and the Whitest “People of Color” in history.

For reference, the Udmurts of Russia (~75% European, ~25% Siberian), who feature on the admixture analysis above, look like this:

Again, they have a slightly Asiatic appearance, but no sane person would ever label them “People of Color”… unless we’re classifying redheads as PoC now? They are a critically endangered minority, after all.

If you liked this article, you may also like my recent article on the ethnogenesis of modern Italians and ancient Romans. It’s less focused on politics and more on genetics, archaeology, and history.

Always use a VPN or Tor and practice good OPSEC.

People often ask me about donations, so, here are some crypto addresses. Any donations will be re-invested in producing content. Thanks!

Email:
thuletide@protonmail.com
(I rarely check this)